A downloadable game for Windows

Made in 14 days for the Seattle Slow Jam.

It's a great look at the need of juggling your own needs - physical and psychological - with the needs of everyone else.

The only issue I have is that the lack of any visual aid for the living quarters makes it extremely difficult to progress the game.
If you can fix that, it would be fantastic.

Other than that, a great narrative game that I'd love to see expanded into a commercial project.

What a coincidence! I've been kind of agonizing over saving energy at home myself.

The only thing I'd improve is just making your bedroom slightly more visible when the lights are out.

Broke my heart, I loved it. The writing here is impeccable all the way through, I especially love the log entries, and the way you can feel mira's frustrated anger in her dialogue. And the fact this is like... jumping off with a certain understanding of consciousness and digital recreations and "copies" rather than trying to explain that stuff is like... it prolly makes it less accessible but for me at least it meant that it could hit emotionally really precisely without needing to explain itself until it became blunt. Great job with this, seriously!!!

The story and atmosphere in this one are great. As the kind of person who immediately tried to kill everyone for giggles, the raw desperation of the ending still got to me.

Man, some of the things I did in this game made me feel awful (in a good way)
Incredibly well made with haunting sound design, excellent writing, and beautifully bleak visuals.
My favorite game from the jam so far!

As someone who is terminally online, and thus someone who spends a lot of 'recourses' on 'digital escapism', this hits.

Incredible atmosphere. Almost shut off the game once or twice instead of making the hard decision.

Wow that intro was a ride. Just the music switch alone, and the color scheme changing so drastically. 1,000 people is SO FEW. I spent my water ration before I knew it's value! Lots of great tone setting. The guide in the control panel mentions colonies going 'hostile or extinct' before you do anything. Again in the control panels when I saw you can turn off your own oxygen purifier, oh no.  I think I know where this is going.

It'd be useful to have a clear marker on the on/off switches for the different functions you can toggle, when I only saw a green menu I didn't know it'd turn the item off until I pressed it and considering the gravity of the labels it made it feel a little silly that I had to experiment to figure out if I was choking out my people or not! I like that you can choose to decrease your resources, I'm running around in complete darkness with this creepy music and it gets the point across with sacrifices and such. Also Sofie's art is adorable.

The only issue I ran into is that turned off all my lights before seeing Sofie the second time, and it was frustrating to see energy was so low when you check the panel again it didn't look like it was taking lights out into account. I know it was weird to turn it off before we needed to but the game was emphasizing energy is important! Then I couldn't turn off lights like I was supposed to once the computer was saying energy is low :(

Also when the computer started recommending low-energy past-times? Old commercials and such, nice touch. I liked that there were multiple endings. Nice work everybody :) 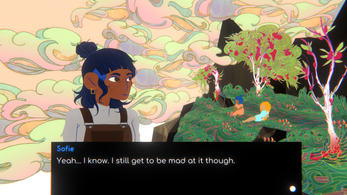 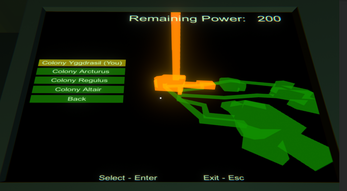 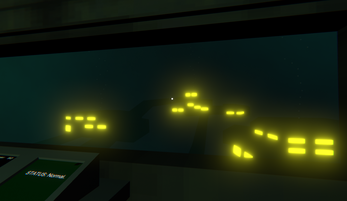